The flags flying at Homer Smith’s marina in Beaufort, NC were standing straight out this morning, even though the forecast was for 2 foot seas at nine second interval. The inlet and near shore seas were a bit bumpy, but the further offshore we went, the better it got and turned out to be a very nice fishing day, with some overcast at times.

The first dolphin was in the boat before the second line was even in the water, and the bite stayed steady through the day. The blackfin tunas were hungry and we came home with a nice mixed catch.

The warm water (75 degrees) has moved in closer and the fish are with it, so now’s the time to go fishing.

We have openings for full and half day charters. 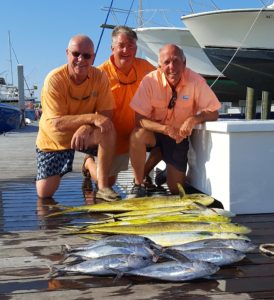